Located in Petite Camargue, between a former branch of the Rhône (active until the 16th century and nowadays called the Rhône Mort de Saint Moran) and the sea, the Domaine de Figueirasse takes its name from the fig trees exploited there during the 19th century.
At the end of the 19th century, many vines died from the phylloxera. However, the nematode carrying the virus cannot develop in the sand. Thus, only the vines planted in the sand resisted to this phenomenon.
Plantations then started appearing in the Petite Camargue region because of its sandy soil, and the Domaine de Figueirasse took another dimension thanks to viticulture. 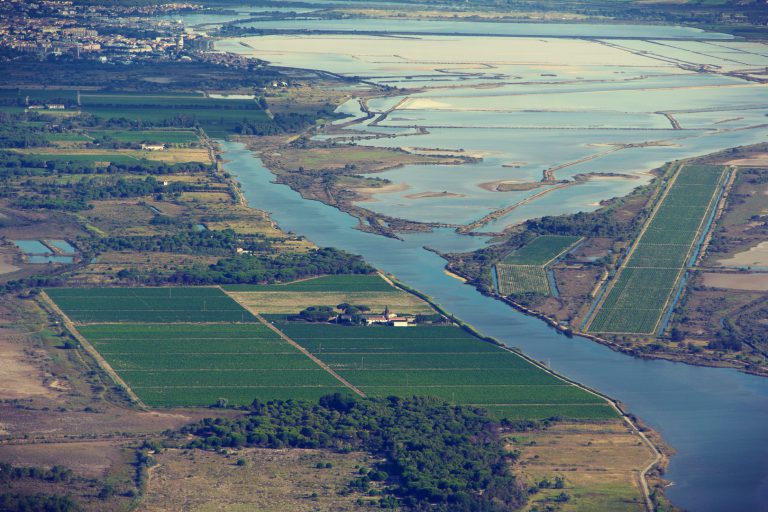 It was at the time a land of 50 acres. The Saumade family, owners since 1905, began extending the surface of plantation, levelling out the ground and thus adding 75 acres to the vineyard. They also doubled the size of the cellar. Gradually, the Domaine de Figueirasse was equipped with all the modern vinification material, and now produces great quality “Sable de Camargue” wines.

The Domaine de Figueirasse now represents 135 acres of vines in a greatly original environment and soil: entirely composed of wind-borne sand, very poor and draining, but with great qualitative potential. The immediate proximity with the sea – less than 200 metres – allows the vines to resist the summer droughts thanks to the humidity-charged sea breeze.

The wine estate is an isolated land, and benefits from the salty sprays of the sea, which act as a sort of sterilisation of the vines. The viticultural work at the Domaine starts shortly after the harvest, with the grassing of the rows between the vines, specifically with the seedling of barley and rye in order to protect the sand from the wind erosion.

Later, in the spring, they are buried by the mechanical action of the Rotovator (not a chemical weeding). An observation and a close following of the vines allow an organic cultivation, in order to adapt the treatments, if necessary.

The Gris de Gris is exclusively produced from Grenache Gris. The harvest is performed with an anticipated maturity level and, most importantly, at night in order to obtain fresh and fruity wines. Then, it is immediately pressed to extract the first juices, bearing a delicate, pale salmon pink colour, typical of the Gris de Gris from Sable de Camargue. The juice will then be promptly separated of its lees (solid parts) in order to get a clear juice, for a fermentation at 15-18°C during two to three weeks.

Open from Monday to Saturday :

Closed on Sunday and holidays