Although the abbey no longer exists (it was destroyed during the Hundred Years War in the 15th century), the farm building, transformed throughout the centuries, became the Mas de Moulines which can be found on the old cadastral plan of 1811. It most probably takes its name from the windmills (“moulins” in French) which existed on the Bérange.

The farmhouse went through many transformations throughout the centuries, starting with the original form of the buildings. However, the main house can be dated thanks to the date, still present to this day, on a joist in the attic: 1713 !

While the land belonged for a long time to the clergy, there were many different owners in the following years. 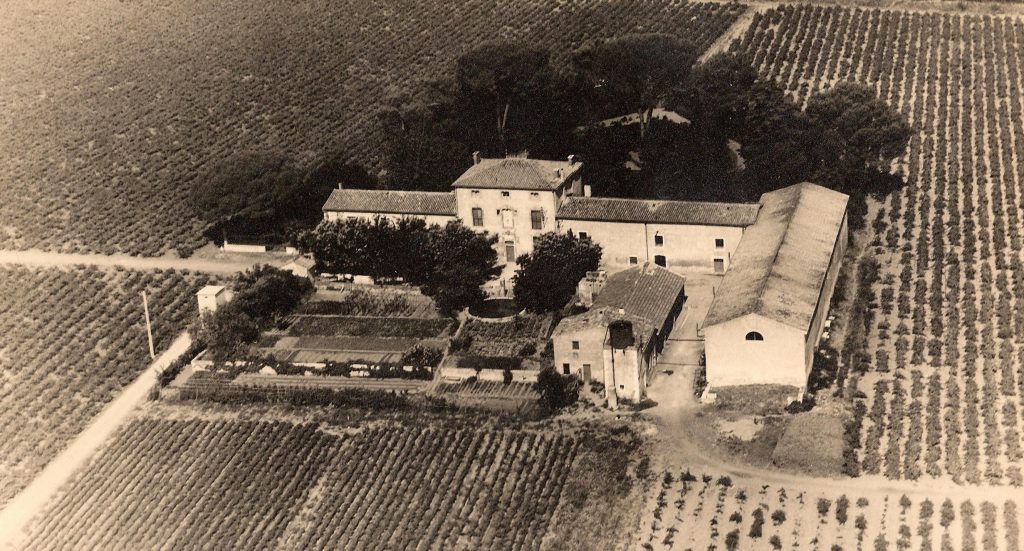 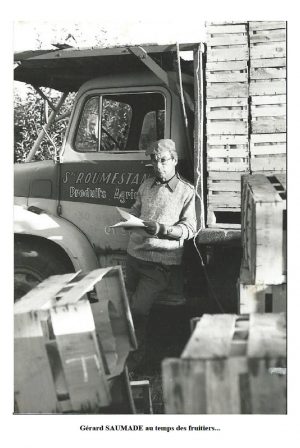 In 1913, Léonce Etienne buys the land, then representing about 70 acres, in order to gift it to his daughter Léoncie as her dowry. She marries Charles Saumade, who descended from a family of winemakers in Lunel-Viel. Charles’ grandfather, Jean-Gabriel Saumade, is the mayor of this town.

While Charles is at the front, his father-in-law Léonce runs the vineyard. He makes many changes and improvements, such as an irrigation system to supply the land and provides the cellar with modern installations: hydraulic press, concrete vats, etc.

Charles replanted and extended the vineyard gradually. Léoncie and he had three children: Robert (1914-2001), Geneviève (1921-2013), and Gérard (1929). The latter diversified the plantations following the frost of 1956 (-24°C on February 2nd): apple trees, peach trees, apricot trees, all the while keeping a few vines which had not frozen (hybrids).

Then, in the 1970s, as he removed the fruit trees, Gérard chose to replant grape varieties which would be ameliorative such as Grenache, Merlot, Cinsault, Ugni-Blanc and Aubun. Thanks to this innovative choice of grape varieties, the production is less quantitative and more qualitative.

In turn, Gérard had three children: Nicole, whose son Vincent now works in the commercial field at the vineyard, Claude and her husband Bernard who passionately maintain the house and its park, and Michel who is now at the head of a vineyard of 135 acres. He is the one who abandoned the trading sale system and preferred a direct sale system. He extended and changed completely the cellar in order to master the whole process of the wine’s elaboration: from the harvest to the bottling. Always extremely dedicated, he planted greatly popular grape varieties such as Chardonnay, Cabernet-Sauvignon, Cabernet-Franc, Merlot, and Shiraz.
Nowadays, Michel also has three children: Charles, Pauline and Adrien. The eldest has graduated from a degree in oenology and is getting ready to take over the reins… 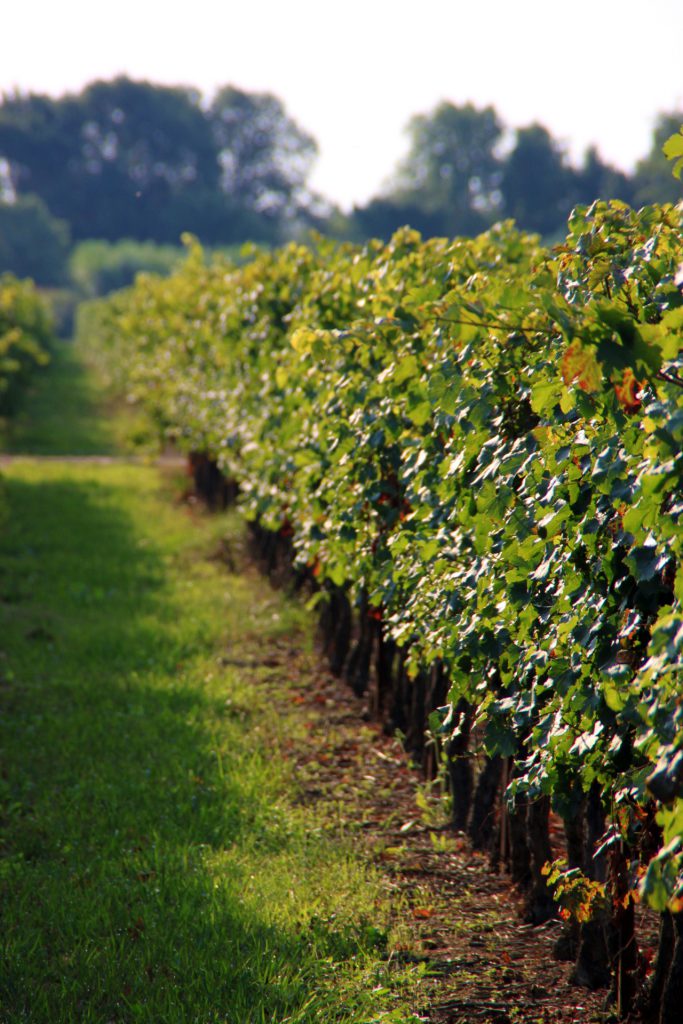 Located on the littoral zone between Montpellier and Nîmes, on a 135 acre wine estate, all in one piece, the land of the Domaine de Moulines allows the cultivation of a great assortment of grape varieties, from Chardonnay to Cabernet-Sauvignon, as well as Viognier, Merlot, Shiraz, Grenache or even Marselan and Vermentino, the last two having been set up more recently. Thanks to its tempered Mediterranean climate and its clay-limestone soil, the vines benefit from an excellent sea humidity in the summer.

The high vine trellising allow a greater foliar surface which will thus be exposed to the sun. The thinning out as well as the pricking of the vines promotes a better ventilation of the bunches. Therefore, these elements help us in the making of wines with supple tannins, fruitier aromas, and a great richness on the palate.

The red wines :
The fast, mechanical harvest allows us to get the grapes which are perfectly mature, and thus avoid any astringent qualities. The harvest is then entirely destemmed in order to only keep the fruit for a long maceration. The grapes ferment in thermoregulated stainless steel vats, allowing us to regulate the fermenting temperature. The maceration process continues for a month or more, until the tannins are fine and melted. The pneumatic pressing of the fermented grapes favours a certain finesse and fullness in our wines. Later, the wines are matured in covered concrete vats or in oak barrels for around 12 months for our best vintages in Merlot and Cabernet-Sauvignon.

The white and rosé wines :
The white and rosé grapes are harvested mechanically but with a lesser level of maturity which then gives a fresh (light acidity) and fruity wine. After the destemming, the direct pneumatic press removes the last of the pressed grapes in order to avoid any heavy astringency. The grape must is then cooled down to 12°C, allowed to settle for 48 hours, before adding yeast to allow a slow fermentation at 15-18°C in order to maintain the best aromas. The wine’s filtration occurs two months later. 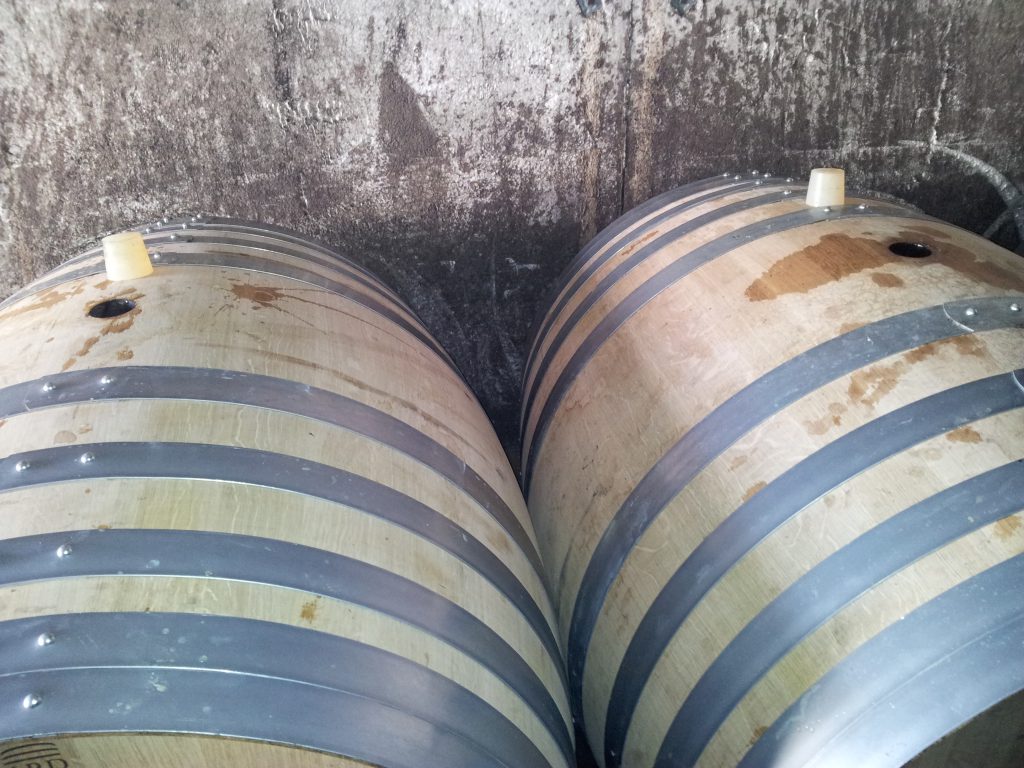 Open from Monday to Saturday :

Closed on Sunday and holidays